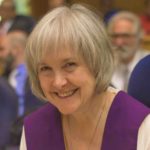 Rev. Deborah Moldow is an ordained interfaith minister committed to assisting in the transformation of human consciousness to a culture of peace. She contributes to this global effort through her ministry, international peace work, interfaith efforts, speaking, and writing, all part of the movement of awakening humanity.  She is founder and president of the Garden of Light, which provides an online platform for the emerging global spirituality.

Deborah serves as Director of the Evolutionary Leaders circle, a project of the Source of Synergy Foundation (founded by Diane Williams) that brings together visionaries committed to the acceleration of the conscious evolution of humanity in these critical times. Rev. Deborah is also a core team member of UNITY EARTH.

She served for 22 years as the Representative to the United Nations of the World Peace Prayer Society, now known as May Peace Prevail on Earth International, and has traveled the globe to conduct Peace Pole dedications and World Peace Flag Ceremonies sending peace to every nation. At the United Nations, she chaired the Values Caucus, co-chaired the International Day of Peace NGO Committee and facilitated the United Religions Initiative multi-faith cooperation circle.

She leads a regular Spirit Salon in San Miguel de Allende, Mexico, where she currently resides.

More information is at WWW.REVDEBORAH.COM.