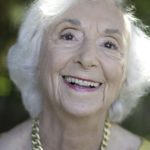 Barbara Marx Hubbard is President of The Foundation for Conscious Evolution. A speaker, social innovator and author of five books, Barbara is an evolutionary educator, communicating the new worldview of conscious evolution.

She is the producer and narrator of the award-winning documentary series, Humanity Ascending: A New Way through Together. Part One: Our Story, is now translated into seven languages, and in Part Two: Visions of a Universal Humanity, she brings together some of the finest minds of our time, presenting us with positive, future scenarios for humanity based on the latest scientific, social and spiritual realities.

She produced 25 SYNCON conferences to bring opposing groups together in the light of the potential of the whole system, and is now reviving the SYNCON process and the Wheel of Cocreation.

Her name was placed in nomination for the vice-presidency of the United States on the Democratic ticket in 1984 proposing a Peace Room in the office of the vice presidency to scan for, map, connect and communicate what is working in America and the world. She is currently working to develop the Peace Room concept into an operating internet platform called The Synergy Engine.

She remains a leader on the growing edge of the women’s movement, supporting the emergence of the Evolutionary Woman, the Feminine Cocreator, who is calling for the next level of creativity and partnership between women and men to guide our world through our current challenges and opportunities. WWW.BARBARAMARXHUBBARD.COM